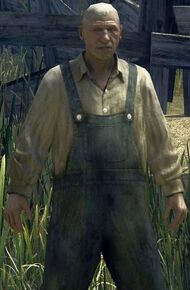 "Farmer" is a character in Call of Juarez.

The farmer resided on a small ranch with his wife Laura in the forested canyons of Texas. He feared the Apache renegades that occupied the area. To combat this he built a tall wall around his house and barn.

Billy in need of a horse to get to Ferguson's Ranch, enters the farmer's ranch. The farmer aims a gun at him, and tells him to leave. Billy however waits for the man to leave and sneaks into the house, steals a saddle, and takes off on horseback, the farmer opening fire on him.

Later on, Billy abandons the horse, and comes across three Apache Renegaes ransacking a burning wagon, a man and a woman (Laura) lying on the ground dead.

Billy kills the renegades and steals one of their horses, and takes off.

The farmer was an older man. He had white hair that was combed over, and some stubble. He wore a white shirt, blue overalls, and brown boots.

The farmer was a paranoid and angry man, wandering the property searching for his wife.