This listing of Minor Characters in the Call of Juarez series covers all information regarding characters with not enough available data to justify maintaining individual articles for them. 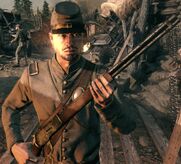 Silas Greaves and his brothers
Add a photo to this gallery
Retrieved from "https://callofjuarez.fandom.com/wiki/Minor_Characters?oldid=12137"
Community content is available under CC-BY-SA unless otherwise noted.