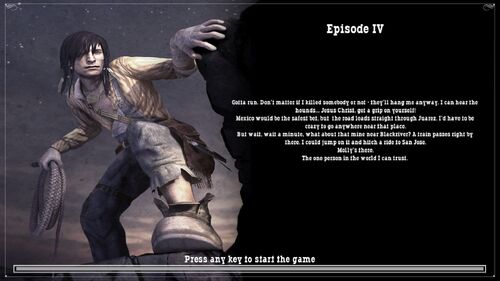 "Gotta run. Don't matter if I killed somebody or not, they'll hang me anyways. I can hear the hounds. Jesus Christ, get a grip on yourself. Mexico would be the safest bet, but the road leads straight through Juarez. I'd have to be crazy to go anywhere near that place. But wait... wait a minute. What about that mine near Black River, a train goes right by there. I could jump on it and hitch a ride to San Jose. Molly's there. The one person in the world I can trust." - Billy Candle, introduction to Episode IV.

Episode IV, And He Shall Flee from the Iron Weapon is the fourth episode of Call of Juarez and the second with Billy Candle as the protagonist.

After several days of being on the run, Billy decided to head for the Black River Mine where he could stowaway on a train to San Jose. Heading through a rocky, patchy forest path that he thought looked familiar, Billy was attacked by two wolves which he dispatched. Coming to a cliff side, he spotted the train on the other side of a canyon. Billy kept on trekking through the darkness and came across the body of an Apache Renegade, and he took the bow and arrows. (Bow doesn't appear on the PC version.)

Billy found several more bodies, and stopped at the edge of a cliff. He discovered the entrance to the mine, and figured he had about a mile to go. Seeing a campfire in the distance, Billy assumed the men were plundering the mine and decided to sneak past, thinking he would be killed if they saw him. Carefully traversing a small cave, he overheard two men talking and realized they were outlaws. Coming out the other side of the cave, one of the men walked toward Billy and under the flash of lightning thought he heard something. The other outlaw nearby told him it was probably just the wind, and, satisfied he turned around and headed back to the other criminal.

Some time later the fugitive hid nearby another camp and listened in on the criminals' conversation. They spoke of robbing the train. Billy continued onward and came across outlaws discussing the bridge into the Black River Mine, saying that it might not hold up because the wind was too strong. Attempting to cross the bridge only for it to collapse, Billy was plunged into river below and narrowly avoided being taken by the rapid flow of the water.

Billy got up on the other side and began to look for another way inside. After some climbing he eventually reached the train tracks and decided to hole up and wait for the train. However, he perceives outlaws coming outside. Billy attacked and several more showed up behind them. Two more exited the mine but were shot down by an emerging Reverend Ray. The train appeared, and Billy leapt onto the roof, barely avoiding being shot by Ray.