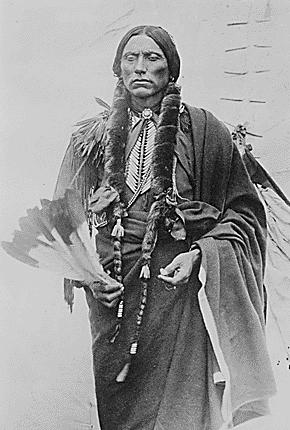 The Comanche emerged as a distinct group shortly before 1700, when they broke off from the Shoshone people and began living along the upper Platte River in Wyoming. This coincided with their acquisition of the horse, which allowed them greater mobility in their search for better hunting grounds. Their original migration took them to the southern Great Plains, into a sweep of territory extending from the Arkansas River to central Texas. During that time, their population increased dramatically because of the abundance of buffalo, an influx of Shoshone migrants, and the adoption of significant numbers of women and children taken captive from rival groups. The Comanche never formed a single cohesive tribal unit but were divided into almost a dozen autonomous groups, called bands. These groups shared the same language and culture, and rarely fought each other.

The horse was a key element in the emergence of a distinctive Comanche culture. Some scholars have suggested the Comanche broke away from the Shoshone and moved southward to search for additional sources of horses among the settlers of New Spain to the south (rather than search for new herds of buffalo.) The Comanche may have been the first group of Plains natives to fully incorporate the horse into their culture and to have introduced the animal to the other Plains peoples. By the mid-19th century, the Comanche were supplying horses to French and American traders and settlers and later to migrants passing through their territory on the way to the California Gold Rush.

The Comanche had stolen many of the horses from other tribes and settlers; they earned their reputation as formidable horse, and later, cattle thieves. Their stealing of livestock from Spanish and American settlers, as well as the other Plains tribes, often led to war. They were formidable opponents who developed strategies for using traditional weapons on horseback. Warfare was a major part of Comanche life. Comanche raids into Mexico traditionally took place during the full moon, when the Comanche could see to ride at night. This led to the term "Comanche Moon," during which the Comanche raided for horses, captives, and weapons. The majority of Comanche raids into Mexico were in the state of Chihuahua and neighboring northern states.

The Comanche maintained an ambiguous relationship with Europeans and later settlers attempting to colonize their territory. The Comanche were valued as trading partners but were feared for their raids. Similarly, they were, at one time or another, at war with virtually every other Native American group living in the Great Plains, leaving opportunities for political maneuvering by European colonial powers and the United States. At one point, Sam Houston, president of the newly created Republic of Texas, almost succeeded in reaching a peace treaty with the Comanche. His efforts were thwarted when the Texas legislature refused to create an official boundary between Texas and the Comancheria.

While the Comanche managed to maintain their independence and increase their territory, by the mid-19th century they faced annihilation because of a wave of epidemics due to Eurasian diseases to which they had no immunity, such as smallpox and measles. Outbreaks of smallpox (1817, 1848) and cholera (1849) took a major toll on the Comanche, whose population dropped from an estimated 20,000 in mid-century to just a few thousand by the 1870s.

The US began efforts in the late 1860s to move the Comanche into reservations, with the Treaty of Medicine Lodge (1867), which offered churches, schools, and annuities in return for a vast tract of land totaling over 60,000 square miles (160,000 km2). The government promised to stop the buffalo hunters who were decimating the great herds of the Plains, provided that the Comanche, along with the Apaches, Kiowas, Cheyenne, and Arapahos, move to a reservation totaling less than 5,000 square miles (13,000 km2) of land. However, the government did not prevent slaughtering of the herds. The Comanche under Isa-tai (White Eagle) retaliated by attacking a group of hunters in the Texas Panhandle in the Second Battle of Adobe Walls (1874). The attack was a disaster for the Comanche, and the US army was called in to drive the remaining Comanche in the area into the reservation. Within just ten years, the buffalo were on the verge of extinction, effectively ending the Comanche way of life as hunters. In 1875, the last free band of Comanches, led by Quahada warrior Quanah Parker, surrendered and moved to the Fort Sill reservation in Oklahoma. The last independent Kiowa and Kiowa Apache had also surrendered.

Unhappy with life on the reservation, 170 warriors and their families, led by Black Horse, left the reservation in late 1876 for the Llano Estacado. Attacks on buffalo hunters' camps led to the Buffalo Hunters' War of 1877.

Some of the Lipan Apache and Mescalero Apache bands with some Comanche in their company held out in northern Mexico until the early 1880s, when Mexican and U.S. Army forces drove them onto reservations or into extinction. The 1890 Census showed 1,598 Comanche at the Fort Sill reservation, which they shared with 1,140 Kiowa and 326 Kiowa Apache. The Agreement with the Comanche, Kiowa and Apache signed with the Cherokee Commission October 6–21, 1892,[28] further reduced their reservation to 480,000 acres (1,900 km2) at a cost of $1.25 per acre ($308.88/km²), with an allotment of 160 acres (0.65 km2) per person per tribe to be held in trust. New allotments were made in 1906 to all children born after the agreement, and the remaining land was opened to white settlement. With this new arrangement, the era of the Comanche reservation came to an abrupt end. The Peneteka band agreed to a peace treaty with the German Immigration Company under John O. Meusebach. This treaty was not affiliated with any level of government. Meusebach brokered the treaty in order to settle the lands on the Fisher-Miller Land Grant, from which were formed the ten counties of Concho, Kimble, Llano, Mason, McCulloch, Menard, Schleicher, San Saba, Sutton and Tom Green.

In contrast to many treaties of its day, this treaty was very brief and simple, with all parties agreeing to a mutual cooperation and a sharing of the land. The treaty was agreed to at a meeting in San Saba County,

In 1866 in Arizona, a Comanche scout spotted two wagons and alerted his tribe. At a river crossing, one of the wagons became lodged in the mud, and when they got out to free it the Comanche attacked, causing the horses of the other wagon to bolt, carrying the rifles and two passengers with it. The first wagon was dealt with by two gunslingers, but the second was apprehended by the Comanche raiders. The passengers, a young preacher and a Mexican woman evaded capture and were rescued from their pursuers by the two men, in the meantime the raiders made off with the second wagon.

Their victory was short lived, as the McCall brothers caught up with them and retook the wagon. Comanche horsemen chased them until their prey entered Apache territory, they came to a halt, not wanting to make enemies of the Apache.

The Comanche are fairly straightforward to fight. When the McCalls stop at the second river while following the wagon, it can be difficult to keep the AI Ray/Thomas alive due to the sheer number of enemies and their positioning, so Concentration Mode is recommended.

In 1884, a Deputy was traversing through Comanche Territory in Texas, tracking down a gang of horse thieves.