Call of Juarez Wiki
Register
Don't have an account?
Sign In
Advertisement
in: Factions, Call of Juarez: Bound in Blood factions, Allies,
and 2 more

In general, the recently arrived Spanish colonists, who settled in villages, and Apache bands developed a pattern of interaction over a few centuries. Both raided and traded with each other. Records of the period seem to indicate that relationships depended upon the specific villages and specific bands that were involved with each other. For example, one band might be friends with one village and raid another. When war happened between the two, the Spanish would send troops, after a battle both sides would "sign a treaty," and both sides would go home.

The traditional and sometimes treacherous relationships continued between the villages and bands with the independence of Mexico in 1821. By 1835 Mexico had placed a bounty on Apache scalps but certain villages were still trading with some bands. When Juan José Compas, the leader of the Mimbreño Apaches, was killed for bounty money in 1837, Mangas Coloradas or Dasoda-hae (Red Sleeves) became the principal chief and war leader. He conducted a series of retaliatory raids against the Mexicans. By 1856, authorities in horse-rich Durango would claim that Indian raids (mostly Comanche and Apache) in their state had taken nearly 6,000 lives, abducted 748 people, and forced the abandonment of 358 settlements over the previous 20 years.

When the United States went to war against Mexico in 1846, many Apache bands promised U.S. soldiers safe passage through their lands. When the U.S. claimed former territories of Mexico in 1846, Mangas Coloradas signed a peace treaty with the nation, respecting them as conquerors of the Mexicans' land. An uneasy peace between the Apache and the new citizens of the United States held until the 1850s. An influx of gold miners into the Santa Rita Mountains led to conflict with the Apache. This period is sometimes called the Apache Wars.

The United States' concept of a reservation had not been used by the Spanish, Mexicans or other Apache neighbors before. Reservations were often badly managed, and bands that had no kinship relationships were forced to live together. No fences existed to keep people in or out. It was not uncommon for a band to be given permission to leave for a short period of time. Other times a band would leave without permission, to raid, return to their homeland to forage, or to simply get away. The military usually had forts nearby. Their job was keeping the various bands on the reservations by finding and returning those who left. The reservation policies of the United States produced conflict and war with the various Apache bands who left the reservations for almost another quarter century.

In 1875, United States military forced the removal of an estimated 1500 Yavapai and Dilzhe's Apache (better known as Tonto Apache) from the Rio Verde Indian Reserve and its several thousand acres of treaty lands promised to them by the United States government. At the orders of the Indian Commissioner, L.E. Dudley, U.S. Army troops made the people, young and old, walk through winter-flooded rivers, mountain passes and narrow canyon trails to get to the Indian Agency at San Carlos, 180 miles (290 km) away. The trek resulted in the loss of several hundred lives. The people were held there in internment for 25 years while white settlers took over their land. Only a few hundred ever returned to their lands. Most United States' histories of this era report that the final defeat of an Apache band took place when 5,000 US troops forced Geronimo's group of 30 to 50 men, women and children to surrender on September 4, 1886 at Skeleton Canyon, Arizona. The Army sent this band and the Chiricahua scouts who had tracked them to military confinement in Florida at Fort Pickens and, subsequently, Ft. Sill, Oklahoma. In the post-war era, the US government arranged for Apache children to be taken from their families for adoption by white Americans in assimilation programs.

Running River, the Apache Chieftain declared that he would wage war on the white man, by trading the ancient medallion for rifles. Puma's Paw, a village elder attempted, unsuccessfully to dissuade Running River from his course of action but was merely met with an insult. The Chief said his son Seeing Farther would venture forth to Mexico, and that it was time for him to prove himself as one of the Apache. Seeing Farther stated it would cause a war that would annihilate their people. Puma's Paw said Seeing Farther deserved his name and with wisdon he warned Running River he did not respect the Creator, and that by taking the medallion from its place of rest, he would bring the Lifegiver's wrath down on his people. He said that it would not be Running River who made the sacrifice, but his tribe, and his son.

Seeing Farther returned a year later, and explained to his people that Juarez, the Mexican man who sold him the rifles was trying to swindle them, bringing with him one of the rifles as proof. Running River, Seeing Farther and many Apache warriors confronted the bandit and his comrades and were about to kill them when William McCall and then Seeing Farther intervened. The Chieftain's son explained William was the one who told him about Juarez's scheme. Their lives were spared but Juarez's wagons, horses, weapons and his mistress, Marisa were taken as ransom. William and his kin, conversely, were welcomed to rest their horses at the Apache camp.

The next day, Ray and Thomas got into a heated argument about Marisa and exchanged blows while the tribe looked on. Before satisfaction for either brawler could be achieved, a massive group of former Confederate soldiers under command of Colonel Jeremy Barnsby attacked the village with their cannons, and ground forces. Unprepared for the assault, the entire tribe was slaughtered leaving only two surviving Apache, Running River and Seeing Farther. The latter was killed the next day by Barnsby as the McCall brothers and his father attempted to rescue him. 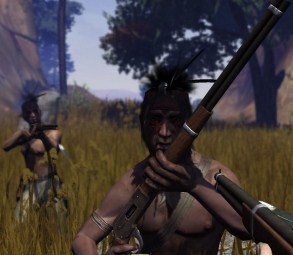 At the Ferguson ranch, Billy was shot by Ray and fell to the river, but was saved by Calm Water, formerly Running River. Unfortunately, Calm Water was killed by Billy's other pursuer. Under the orders of Grizzwald, Vasquez's former henchman, many Apache assaulted a stagecoach carrying Vasquez with intent to assassinate him, but were driven back by the Army soldiers and the Deputy of Round Rock.

Most of the Apache renegades are armed with Classic Rifles and Double Barreled Shotguns. As Billy, it is best to sneak, or if one is skilled enough to use the Prime Scoped Classic Rifle (found in the angry farmer's wagon in the Xbox 360 version) and pick them off from a distance. As Ray, it is best to prioritize eliminating those armed with shotguns first as they tend to be deadlier. For the ones with tomahawks, it is best for Ray to go into Concentration Mode, or fan a revolver. It should also be noted the Bible does not work on the Apache renegades.